Hummer as most people know both the brand and its models is a type of Sport Utility Vehicle developed and marketed by the company responsible for creating the original military use vehicle known as Humvee. The Hummer was basically a civilian Humvee, which had most of the military vehicle capabilities of its army use counterpart. The story of the Hummer brand and vehicle is one of mixed feelings. Some might call it too American and obnoxious, others might love the concept, while some find it to be downright ridiculous. Regardless of how one views the Hummer, the vehicle has left its impression and mark. 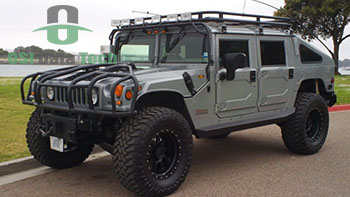 Originally, the Hummer vehicle or the H1 model was developed and marketed by the company responsible for making the military Humvee version, namely AM General. The first model Hummer, the H1 was released in 1992 in the United States. The vehicle although mostly overlapping with the military version was of course fitted with all the comforts one would expect of a SUV. AM General were working on a civilian version as early as the late nineteen eighties. One of the main reasons why the Hummer project was completed and hit the market was Arnold Schwarzenegger who saw an army convoy of the vehicle while filming one of his movies.

From 1992 to 1999 the Hummer vehicle (which later become known as H1 model) was manufactured and marketed by the original company AM General. In nineteen ninety nine, General Motors showed interest in the brand and bought off the rights from AM General who continued to manufacture the vehicle, whilst GM was taking care of marketing and sales. Subsequently, GM contracted AM General for another two generations of the Hummer which became known as the H2 and H3 models. For a period of time, the Hummer concept caught on and the vehicle actually saw international sales and was manufactured in a number of plants overseas. There even right hand drive versions produced for export to Australia. The Hummer craze even reached Russia, and Hummer H2 was assembled in a plant near Kaliningrad by a local operator called Avotor.

In two thousand eight, the grip of the economic crisis and the sky high oil prices brought about the demise of Hummer as a brand and concept. High oil prices and stagnation on all levels of economy meant that people no longer wanted large gas guzzling SUVs, let alone over the top ones like Hummer. In two thousand nine GM officials stated the Hummer brand was under review and could potentially be shut down or production suspended for an unspecified amount of time. Shortly after, GM decided to try and sell off the brand. Initially there were interested buyers, particularly from China, but the deal turned out to be a dud. The Chinese buyers were apparently blocked by the Chinese government (China being a state-planned economy) from buying Hummer and nothing ever came out of it.

After that, there were a couple of attempted sell offs to other interested parties, but nothing ever came out of that either, so a year later in 2010, GM decided to dismantle the Hummer brand for good and so put the end to the civilian Humvee concept. Hummer dealerships across the US shut down during the same year, and the last ever H3 Hummer rolled off the production line in late May, 2010. Sadly, the original vehicle manufacturer AM General, also lost their bid to develop and build a new replacement for the Humvee – a project commissioned by the US Army in 2015.

A couple of pioneering companies have developed plug in electric and hybrid versions of the Hummer in recent years.