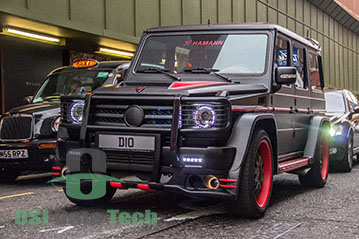 Not wanting to let the Americans get ahead of them in producing overly large, overly expensive and overly wasteful “military vehicles” for civilians, Mercedes-Benz has left its mark in the field with the G-class (formerly branded as the G-wagon). A favorite of dictators, Slavic “businessmen” and people who absolutely adore to overcompensate it is not rare that you see one of these hulking impractical monstrosities parked on 3 disabled parking spaces.

Much like anything else that is such a huge waste of resources and a bastion of needless grandiosity this behemoth was made on the behest of the Shah of Iran. In order to produce a vehicle that is actually capable of going on and off road the German-based automotive giant looked around for some help. Their salvation came in the form of the Austrian Steyr-Daimler-Puch, a firm, already producing military vehicles. The following Anschluss after rigorous testing produced the G-Class and it went on the market in 1979.

Now to be fair on the thing it did perform adequately by military standards. It was rugged yet speedy enough and soon became a staple for many armies around the world. However there was a problem. The main buyers were meant to be civilians. While doing just fine for an army veteran these SUVs were way too Spartan for the average consumer (it was obscenely overpriced as all things MB are, while it only got air conditioning in 1981)

These refinements did little to improve comfort and it was not until the late 80’s that the equipment of the G became analogous to other MB models. However there was still something noticeably off with it and it was the speed, it was simply too sluggish. Mercedes-Benz this time decided to simply release an AMG line (with prices I would prefer not disclosing) which no sane person would ever buy.